Declare Climate Change a Major Disaster before it’s too late 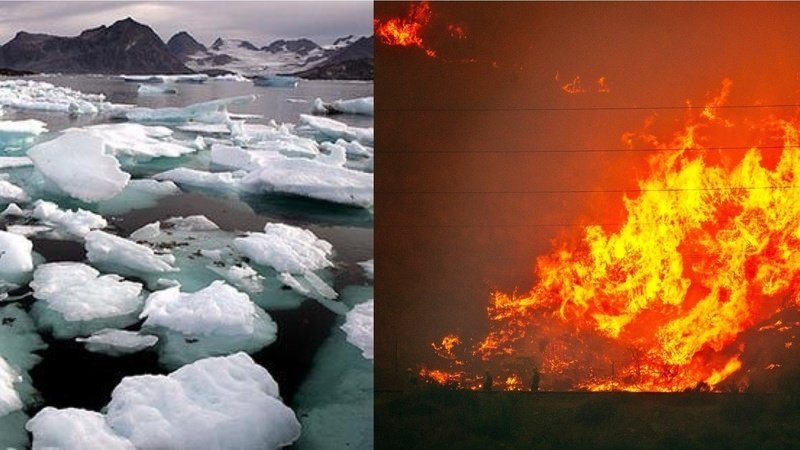 It is very urgent that Governor Jerry Brown, using his legal powers as Governor of California,  issues a CLIMATE CHANGE MAJOR DISASTER DECLARATION and requests Federal funding, in order to unleash all the organizational, structural, scientific and financial State and Federal resources to stop Climate Change and protect Californians’ life and property and our invaluable environment.

The incontrovertible evidence is that Climate Change is incrementally increasing the number and magnitude of catastrophic events like exceptional droughts, heat waves, floods, blizzards, tornados, hurricanes, sea level rise, coastal cities inundation, ocean acidification, extinction of plant and animal species, epidemics, disruption of food production and other deleterious events that, combined or individually, have disastrous consequences on our economies and our wellbeing and survival.

California has its share of Climate-related catastrophic events, both forecast and current, particularly showing in the 500-year drought that, in 2015 alone, caused a near $3 billion loss for California agriculture, left several communities without water, 542,000 acres lay fallow, 6335 wildfires burned 307,598 acres (including much of the town of Middletown) and destroyed thousands of structures. Also, the pumping of very large amounts of groundwater used to compensate for the lack of surface water is causing the separation of the lithosphere from the ground above, which will lead to earthquakes.

In February 2017, the confluence of Atmospheric Rivers, fueled by Climate Change and of infrastructure insufficiently built and maintained to withstand the forces of the new Climate created havoc in California, like in the region of the Oroville Dam where the severe damage to its two spillways caused by the racing waters, put 200,000 lives, thousands of structures and thousands of acres at very serious risk.

Climate Change is still being discussed as a tremendous potential threat to our children and grandchildren but, the reality is that Climate Change is already here and that it will get worse if we continue dumping more greenhouse gases in the atmosphere.

Indicators of Climate Change are already in the danger zone. Carbon Dioxide (CO2) levels in the atmosphere, which for 1.3 million years had not been higher than 275 ppm (parts per million) until the onset of the Industrial Revolution, are now above 410 ppm. The global average air temperature is since 2015, 1º Celsius higher than in pre-industrial times, a level that climate scientists consider the gateway to the acceleration of the disruptions of the Climate (1.5 º Celsius for the first half of 2016 and 1.2º Celsius for the whole 2016).  It is now confirmed that 2016 was the hottest year on record.

Without a Disaster Declaration, this greatest-of-threats remains undefined and acknowledged, taking away the focus necessary to effectively deal with it. We say that we are “fighting Climate Change” without having ever declared war.

The extent and nature of the problem requires immediate, massive action to retrofit our economy to stop emitting greenhouse gases into the atmosphere and move fast towards a “carbon negative” economy, as well as to make the necessary changes to minimize the damage from Climate Change-related events that are going to unfold from Climate disruptions that have already taken place.

To mitigate our Climate Change Disaster, action must be immediate, must be massive and requires a level of mobilization of all our resources similar to what this country experienced during the New Deal and World War II. Individual actions, while useful and necessary, are insufficient. Indirect measures, like taxes on carbon emissions, are beneficial but too slow.

Putting off the retrofitting of our economy to address Climate Change is a very dangerous mistake. Factors such as the long residence time of already emitted greenhouse gases in the atmosphere and the activation of slow feedbacks (like the melting of the permafrost) will soon make future mitigating actions inconsequential.

There is a lot to lose from inaction and a lot to gain from speedy action. Without speedy action, more catastrophes will unfold with a high price in the loss of lives and property and high risks to the economy. With speedy action, life and property will be better protected, California’s economy will experience a boom, California will have access to federal disaster funds that do not require the approval of Congress and California will lead other States and Countries in the highly needed and greatest peaceful cooperation effort ever.

Governor Brown, please accept leadership of this massive transformation of California to a CLIMATE CHANGE-READY STATE. This life-affirming effort will give us the greatest chance of thriving through change instead of merely surviving change.

Alex Park and Julia Lurie. “California’s Drought Could Be the Worst in 500 Years. And why it’s too late for the rain.” Mother Jones. February 10, 2014.
http://www.motherjones.com/environment/2014/02/california-drought-matters-more-just-california

Ethan Huff. “How California’s extreme drought will lead to a wave of earthquakes”. NaturalNews.com. August 18, 2014.
http://www.naturalnews.com/046503_drought_earthquakes_California.html