The International Society for Children’s Health and the Environment (ISCHE) has awarded Philippe Grandjean, MD, DMSc, the Herbert Needleman Award in Children’s Environmental Health “for his work on methyl mercury, lead, PFAS and other toxic chemicals.” One of the chemicals Dr. Grandjean has been studying for decades is fluoride, including the impact of low-levels of fluoride on the developing brain. He was also an expert witness called to testify at our federal lawsuit against the US Environmental Protection Agency (EPA) to end fluoridation due to neurotoxicity. 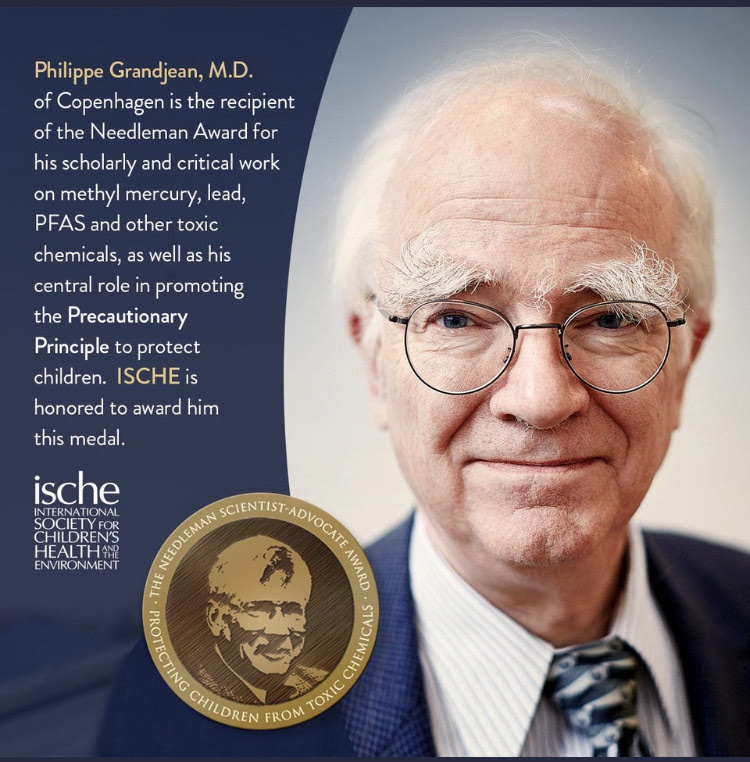 The ISCHE is a non-profit society of children’s environmental health professionals, including epidemiologists, chemists, toxicologists, and clinicians. The Needleman award is given annually to scientist-advocates who perform important research in children’s environmental health, whose work significantly contributes to the enactment of policies and practices that protect children from toxic chemicals, and who pursue their research in the face of strong opposition.

Dr Grandjean is a physician, a scientist, an internationally known expert in environmental epidemiology, an author, and a professor at both Harvard School of Public Health and the University of Southern Denmark. He has held grants and/or consulted with the EPA itself, the National Institutes of Health, the U.S. Food and Drug Administration, the World Health Organization, and numerous other bodies over 25 years. He is the author or co-author of some 500 scientific papers.

He is perhaps best known worldwide for his research on the neurotoxicity of mercury, which involved studying the IQ of children born to mothers whose diet was high in fish consumption (and thence high in mercury). This work led to defining the EPA’s safe regulatory levels for mercury in the diet, and inspired downward revisions of methyl mercury exposure limits internationally. He’s seen similar results recently to his groundbreaking work on perfluorinated alkylate substances (PFASs).

Since the 1980s, Dr. Grandjean has been studying the effects of fluoride. It began at the suggestion of Irving Selikoff (Selikoff was the founder of the Environmental and Occupational Health Division of Mount Sinai Hospital in New York, and is known as the “father” of asbestos research), when he looked into the health effects of cryolite on workers (cryolite is a mineral containing fluoride, used in the manufacture of aluminum and approved for use as a pesticide on vegetables and fruits). Not only did the exposed workers have the expected symptoms of skeletal fluorosis, but they exhibited other health problems including neurological symptoms.

In regard to fluoridation, Dr. Grandjean’s name came into prominence when he published a meta-analysis of 27 fluoride-IQ studies, which found – even though they were conducted in many different geographical areas, by different research teams over a period of about 20 years – a remarkably consistent result (Choi et al., 2012). Of these 27 studies, 26 found a lowering of IQ in the children with higher fluoride exposure.

Since his work in 2012, Dr. Grandjean has authored or co-authored additional studies and reviews on fluoride’s neurotoxicity, including (Choi et al., 2014), his updated review on fluoride neurotoxicity (Grandjean, 2019) and the first benchmark dose analysis on fetal fluoride exposure (Grandjean et al., 2021), which found that a maternal urine fluoride concentration of 0.2mg/L, which studies show is exceeded 4 to 5 times in pregnant women living in fluoridated communities (Uyghurturk et al., 2020 / Till et al., 2018), was enough to lower IQ by 1 point.

Standing Up To Those Who Oppose Efforts to Protect The Vulnerable

The Needleman award was created to honor the memory of the late Herbert L Needleman, MD, who was a pediatrician and scientist who conducted groundbreaking research that led to fundamental changes in policy to prevent childhood lead poisoning despite fierce attacks by the lead industry and bureaucratic inertia from government. Like Needleman, Dr. Grandjean has opposition to his work on fluoridation from the dental industry and industry-captured public health officials.  An example I’d like to share comes from cross-examination during our TSCA lawsuit against the EPA, where Dr. Grandjean was one of the world-renowned experts the Fluoride Action Network’s attorneys called to testify on the science linking fluoridation to fetal neurotoxicity.

**As a side note, the EPA’s key expert witness, brought to defend the safety of fluoridation chemicals, had a very different background. She had previosly defended the safety of glyphosate for Monsanto, Agent Orange for Dow Chemical, PFOAs for 3M, and pesticides for Syngenta and Croplife.

Dr. Grandjean testified during our TSCA trial that he was threatened by colleagues and administrators at Harvard University to retract his 2012 conclusions of neurotoxicity from fluoride exposure.  As a person with integrity, he defied these threats:

“Well if you want the whole story, I was asked to meet with a professor from Harvard’s Dental School. He came to my office and essentially threatened me. He said I was endangering public health, and he demanded that I issue a statement similar to what you’re talking about now.

When I said that I would think it over, he went to the Dean’s of the medical school, the dental school, and the school of public health -that is my boss – without telling me, and the Dean’s did not know what was going on. They were just asked to sign a statement saying, in agreement with CDC that fluoridation is the cornerstone of modern public health. And so this way, the press office of Harvard school of public health said to me, we better issue a statement because the article we just published in a journal called Harvard Public Health has resulted in the largest number of letters from readers, mainly dentists – that is fluoridation proponents, including this professor/colleague from Harvard’s dental school – who demanded that Harvard retract the results of my study.

And I said ‘hey, my study, I can’t retract that, I can’t retract the conclusions.’ But I was then presented with the wording that you’re just referring to. So this is not my wording. It is an attempt to calm the tempers of the fluoridation proponents in the U.S.”

As Dr. Grandjean describes at the end of his statement, his name was added to a Harvard document intended to show support for the safety of fluoridation; essentially refuting his own study’s findings. However, Dr. Grandjean stuck to his guns, never signed the document, and later published a press release calling for fluoride levels in water to be lowered “right away.”  The Harvard T.H. Chan School of Public Health published the press release, quoting Grandjean:

“Just because we did studies over the last 70 years, it doesn’t mean that we did everything that is necessary to know for sure that fluoridation is not toxic to some processes in the body or development of the brain. Those studies have actually not been done.

I’ve worked in this field long enough to know that with time, we have found that lead, mercury, and pesticides were more toxic than we originally thought. I am not willing to sit here and say, okay, let’s expose the next generation’s brains and just hope for the best.”

Read a summary of Dr. Grandjean’s pre-filed Declaratory Statement by clicking on the image below:

Click here to read Dr. Grandjean’s full declaration for the trial (his qualifications, opinions, basis for opinions, and references).

You can also watch and easily share a video version of the declaration summary by clicking below: